We sometimes see bumper stickers that say ‘who rescued who?’ When we see those bumper stickers, we realize that it is somebody who rescued a dog but then realized that the dog gives them much more than they could ever hope to give in return. It’s a beautiful story that we see played out many times and on occasion, we may see the dogs give us something that is above and beyond what we could ever expect from our faithful companion. That was what happened with a one-year-old girl named Charlotte, who loved her new rescue dog, a Doberman pinscher named Kahn.

When they first brought Kahn into the home, they realized that he was a survivor of animal abuse. There is always a possibility that a dog would lash out in such a situation, and even though it is not the fault of the dog, it is still something to be careful of when you have small children in the home. In addition, Dobermans tend to be rather loyal dogs and most people would admit that there are not bad dogs, there are only bad owners. As it turns out, this Doberman was loving and sweet but something happened that made the mother question the loyalty of the dog, if only for a minute. 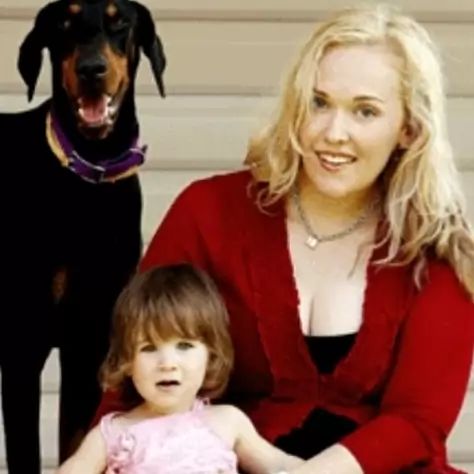 It happened when Charlotte was outside and Kahn was acting strangely. He was uneasy and began nudging Charlotte, almost as if he was trying to get her to move. Suddenly, he grabbed the little girl by the diaper and threw her over his shoulder. The one-year-old girl flew through the air, and her mother was in a panic.

As it turns out, the mother certainly had a lot to be panicked of but it was not the dog. There was a king brown snake that was there where Charlotte had been, and Kahn did what he had to do in order to get her to a safe location. Unfortunately, he did get bitten by the snake but he recovered.